Home News (Image credit: TechRadar) Shooting zombies is a gaming tale as old as time, and getting to do it in virtual reality has been a staple of the medium as VR demos and games have emerged over the past few years.But doing it in a free-roaming VR arcade, where you can run around simulated… 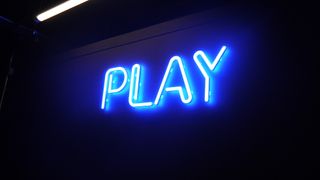 Shooting zombies is a gaming tale as old as time, and getting to do it in virtual reality has been a staple of the medium as VR demos and games have emerged over the past few years.

But doing it in a free-roaming VR arcade, where you can run around simulated warehouses and courtyards with a team of trigger-finger players, without wires restricting you to certain spots in the room, is a whole other experience.

We had the chance to head to a VR arcade called Navrtar – at its London location, though it also has four arcades set up in the Netherlands, with plans to bring more pop-up arcades to the UK’s capital.

With a variety of location-based VR games, all of which revolve around shooting something or other – zombies, aliens, and the like – it’s clear that VR is building up a real foundation as a group leisure activity in the same vein as laser tag or bowling.

However, shooting enemies while running freestyle around a room was more immersive than any of those activities – or literally any VR games we’d played in arcades or living rooms before.

Having jumped through a number of levels in the zombie-themed game (the most popular one, we’re told), we were taken back by how intuitive and carefree the experience was.

Five of us traipsed into a black room, with blue markers around the edges of the floor – to signal to camera sensors in the ceiling where the simulation began and ended.

After picking up a VR headset (the 2016 Oculus Rift), putting on a backpack (containing a high-spec PC to power the headset), and lifting a gun peripheral off the wall, we were thrown into a virtual space to pick between a sniper rifle, assault rifle, or (our personal choice) a shotgun.

We were tasked with defending a number of locations from encroaching zombies, similar to the beloved zombies mode in past Call of Duty games, where the undead run through open doors or windows towards you in increasing numbers. It was actually thrilling: full of quick-fire shotgun blasts, double-taking at larger and larger enemies, and responding to the literal screams of our (highly dramatic) teammates.

While the AI enemy was highly basic, the free movement added a tactical element that made outmaneuvering them massively satisfying – something you don’t get with static VR shooters like Arizona Sunshine, or the point-and-teleport workarounds of games like Doom VFR.

We could dash, halt, kneel, and run off again in a responsive and freeing way. We never found ourselves running into each other, despite the chaos of five players locked inside VR – while the realistic movement input prevented any motion sickness, even if the graphics weren’t overly sophisticated (we did start a level inside a wall at one point).

Some of the usual VR teething problems were there: an irritating weight at the front of our head being the main one. But the joy of the experience far overpowered any inconveniences we felt to start, which is surprising given how limited the basic game design of the encounter was.

Birds of a tether

The main draw of a VR bar or VR arcade is the ease of entry: while an Oculus Rift VR headset and set of controllers will set you back $399 / £399 (around AU$600), it’s just a tenth of the price to try it out in a dedicated (and casual) location for an hour or so.

That’s more than you might spend on a couple of drinks and a movie ticket, but we’re getting to a point where VR is cheap and cheerful enough to make it really worthwhile as a group activity.

One of the biggest issues still plaguing VR – by all accounts still a medium in its early days – is its physical restrictions. Running powerful simulations requires heavy hardware, meaning you’re often stuck with an uncomfortable weight on your head, or with a wire tethering you to a desktop PC you have to navigate.

The laptop rucksacks used by Navrtar are certainly one solution, and we’re now at the point where these portable computers and both powerful and light enough to be fit for purpose. It gave us a lot more freedom than the ceiling tethers used by The VR Concept (another UK chain of VR bars).

Free-roaming isn’t a console killer by any means, but it’s certainly a good deal more exciting than the VR we’ve seen before.

Why We Sometimes Feel Hungry Even After Eating A Meal

Black Tea For Weight Loss: Does It Work?