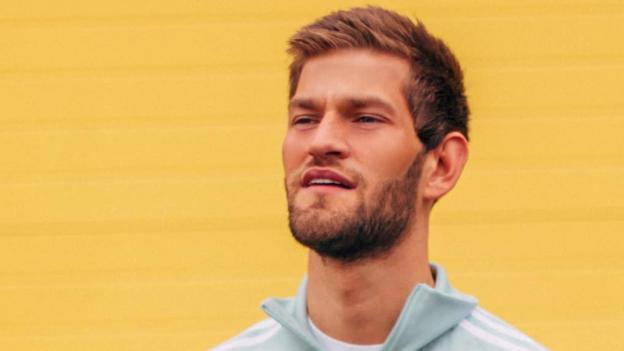 Last weekend saw Norwich become the first side to be relegated from this season’s Premier League, but which two clubs will join them in going down to the Championship?

“With three games left, Bournemouth and Aston Villa have both given themselves a chance,” said BBC football expert Mark Lawrenson.

“But I still don’t see them getting the points they need to climb out of the bottom three.”

“Everywhere I look, on TV, social media and online, the outlook for us is quite negative,” Dawe told BBC Sport. “People have kind of written us off.

“But our win over Crystal Palace on Sunday was massive and I am actually quietly confident we can do it.

“West Ham and Watford play each other [on Friday] and then Watford face Manchester City and Arsenal in their final two fixtures, while West Ham have got to play Manchester United and us.

“So, in my eyes, I am thinking that if the Hammers and Hornets draw on Friday, then it is in our hands – as long as we can beat Everton on Thursday first.

“My maths has us staying up, but it all comes down to that game at Goodison Park. Anything less than a win for us in that one, then I would say we are down, but all you can ask for is that our players are up for the fight.”

A correct result (picking a win, draw or defeat) is worth 10 points. The exact score earns 40 points.

Chelsea manager Frank Lampard will expect a reaction from his team after their defeat by Sheffield United, and I think he will get one.

I wouldn’t be surprised if Norwich are quite competitive now they are relegated, because the pressure is off them now.

But I still expect the Blues to win, because they have got a point to prove. Some of their players are essentially on trial under Lampard so they have to try to impress him.

Wolves returned to winning ways against Everton at the weekend, which is one of the impressive things about them – they don’t let the odd bad result affect them, or alter their game plan when they lose.

As good as Burnley have been of late – and they were very good when they held Liverpool last time out – if Wolves play well, they will win.

Nathan’s prediction: Wolves have been amazing for midlands football, but I can’t help being a little bit jealous of their success. They play brilliant football and, if they recruit properly in the next transfer window, then next season they are going to be real contenders – and I am talking about for the title. 0-2

Bournemouth’s win over Leicester on Sunday was such a strange game. Leicester looked in control at 1-0 up at half-time, but self-imploded after the break.

I don’t see the Cherries’ revival continuing at Etihad Stadium, though. Manchester City have hit five goals in each of their past two games, and I think they will bag a few more here.

Nathan’s prediction: I am hoping City will do us a massive favour, and I think they will. Bournemouth will have a lot of confidence after beating Leicester, but City’s quality will see them through. I am not writing the Cherries off, though. It wouldn’t surprise me if they and Villa swapped places with Watford and West Ham, and those two went down. 2-0

Newcastle have lost their past two games, against Manchester City and Watford, and they are safe in mid-table with not a great deal to play for.

Tottenham won the north London derby at the weekend, but to say it was a unconvincing victory is probably the fairest way of summing it up.

Spurs have got a lot of work to do if they want to get nearer the top two next season, but with Harry Kane in their side, they always carry a goal threat.

The worry there is that someone might come in for Kane and say to him ‘look, come and play for a team who try to win games’ because I don’t imagine playing up front for Spurs is too much fun at the moment – he is being fed off scraps.

Plus, we have seen before with Dimitar Berbatov and Michael Carrick that, if players want to leave and a big enough offer is received, Tottenham chairman Daniel Levy is willing to sell.

Liverpool had a bit of a hiccup against Burnley on Saturday, which wasn’t a massive surprise. I know they can still pass 100 points and beat Manchester City’s record, but I don’t think the thought of doing that will be driving their players on.

Reds boss Jurgen Klopp changed his side a bit against the Clarets, which was good for the youngsters in his squad, but I don’t think we will see Liverpool at their very best here either.

Against Tottenham, Arsenal did what Arsenal normally do – just when you think they might have turned a corner, they get beaten. They had some moments to forget at the back.

They will think they got mugged a little but they were just naive defensively and, until they change their personnel, that is the way it is going to be with them all the time.

I am expecting an open game, though, and I’m going with another draw for Liverpool.

Nathan’s prediction: I actually have this weird feeling Arsenal will nick it, but I can’t really go against Liverpool. Villa lost home and away to the Reds but gave a good account of ourselves in both games, and were 1-0 up after 86 minutes at Villa Park in November before losing 2-1. One of my best mates is a Liverpool fan and I was hammering him with texts the whole game, until the very end. That was a good example of what this season has been like for Villa fans – it is hard to get angry like we did when we went down in 2016. That season, out on the pitch no-one really cared but this time the players have given everything. When we’ve lost, it’s usually because we’ve just not been good enough. 0-1

Aston Villa’s win over Crystal Palace on Sunday was massive for them after Watford and West Ham both won on the previous day.

This is another big game for Villa, but I don’t see it ending so well. I know they beat Palace 2-0 but they don’t seem to create many chances at all from open play, which has to be a real worry for them.

The way they played against Wolves, Everton looked as though they were on the beach already, but Carlo Ancelotti tore into them afterwards and, it feels as if we will see a reaction here.

I think quite a few people in this Everton team will be elsewhere next season, though.

I spoke before about how some of the Chelsea team are on trial under Lampard, but I think Ancelotti has already made his mind up about a number of his players, and decided whether they are what he wants or not.

Nathan’s prediction: We are struggling for two big reasons – a lack of goals, because we can’t find a goal anywhere, and also the defence leaking goals everywhere. We’ve only had three clean sheets in 35 league games which is always an issue when you’ve been promoted. We have had a lot of injuries too but, ultimately, it is down to poor recruitment and not enough Premier League quality players being brought in. I still feel like we will beat Everton, though. We are in the last-chance saloon and the players will know it too, and throw absolutely everything at this game. 1-3

Nathan on why he is a Villa fan: “My whole family are from Birmingham and, apart from one of my uncles who supports Leeds, they are all Villa fans, so it was how I was brought up. We are local and we go to all the games, so we all follow them together.

“I used to sit in the Holte End at Villa Park when I first started going, when Martin O’Neill was manager. We had some great players then, but the ones that stick out in my mind are Juan Pablo Angel, Olof Mellberg, Martin Laursen and Gareth Barry.

“Now I am sitting at the other end, near the away fans – I had to move there as the games were getting boring, as the team was getting worse. I can have a bit of banter with the away fans now. But those years under O’Neill, where we were really close to Champions League football, the Holte End was rocking every week and they are really good memories.”

Leicester badly need a win to boost their hopes of a top-four finish, especially now they know fifth place won’t get them into next season’s Champions League after Manchester City’s European ban was overturned.

I don’t see them getting three points here, though. It doesn’t seem to matter who or where Sheffield United play at the moment because, defensively, they are so well set up.

Nathan’s prediction: From a Villa perspective it was very frustrating to follow Leicester’s collapse at Bournemouth, especially because of their defensive errors. I think the Foxes will pick themselves up a bit here. 2-2

Palace have lost five straight league games now, while United would have won five in a row if not for that last-gasp Southampton equaliser on Monday night.

It’s hard to go against form like that, for both sides. I just don’t see the Eagles scoring goals against United, or stopping them either.

The four points that Brighton picked up against Arsenal and Leicester last month have been huge in terms of keeping them out of trouble, but they are not safe yet.

The Seagulls are still looking over their shoulder, especially after losing their previous two games, and they will just be hoping that Bournemouth and Villa do not pick anything up in midweek to close the gap further before they play Saints.

I still think Brighton will stay up, but that will be down to other teams’ results rather than their own.

Nathan’s prediction: Brighton play Newcastle (h) and Burnley (a) after this game so I think they will pick up enough points to get to safety, even if Saints nick it. 1-0

This is a big opportunity for both teams to take a huge step towards survival, and I think it is West Ham who will take it.

If you analyse the Hammers’ performances since football restarted, they have actually been playing well – despite not winning every game.

Two wins in a week have given Watford a little bit of breathing space but I think their battle to stay up will go to the final day.

Nathan’s prediction: West Ham are arguably the better team but I either want a draw here, or a Watford win – Villa are in control of our own destiny then. If we can get to our game against West Ham on the final day with a chance of staying up then I’d take that scenario – although it would be nerve-wracking. I don’t remember us having a league game with so much riding on it, so it would be new territory for me. 2-2

How did Lawro do last time?

In the last round of Premier League games, Lawro got four correct results and no exact scores, for a total of 40 points.

He beat The Manor’s Scotty Stacks, who got three correct results with no exact scores, for a total of 30 points.

How can women’s football regain momentum after lockdown?

How can women’s football regain momentum after lockdown?

Aug 13, 2020
We use cookies to ensure that we give you the best experience on our website. If you continue to use this site we will assume that you are happy with it.OkNo