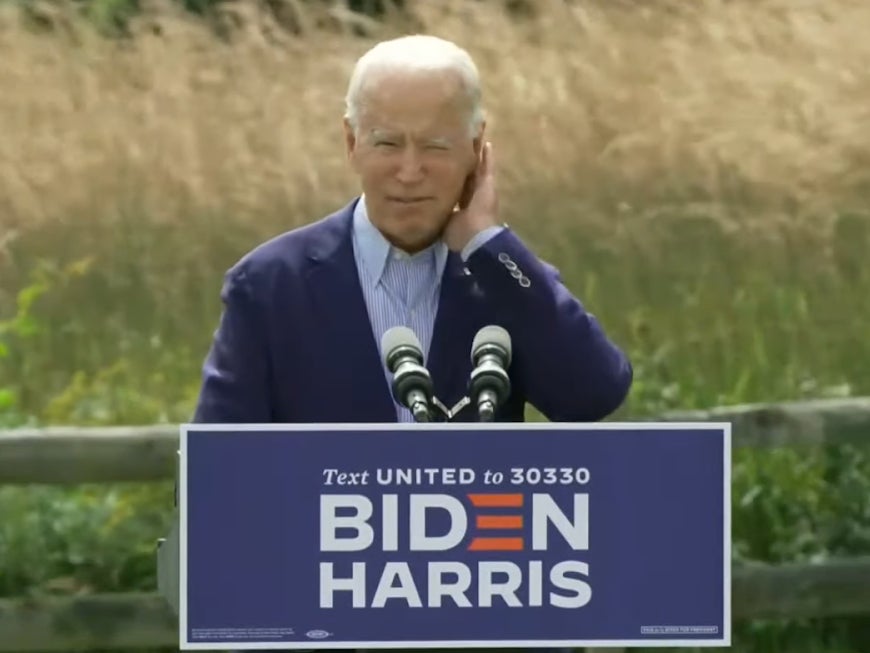 Joe Biden was rudely interrupted by a large bug while giving remarks on climate change in Wilmington, Delaware, today.

The Democratic presidential nominee paused momentarily to fiercely swat a large bug from his neck while in the middle of his speech on climate change and wildfires in California.

In the seconds running up to the hit, the insect can be seen crawling up Mr Biden’s right shoulder before it dissapears behind his neck.

Moments later, while speaking about the US economy and the “unrelenting impact of climate change” Mr Biden swats purposefully at his neck and the a large bug falls behind the podium.

“Sorry that was a bug,” he says chuckling, “speaking of the environment.”

“You know what is actually threatening our suburbs? Fires,” he said in response to Mr Trump’s continued attacks that Mr Biden’s policies would threaten to destroy the suburbs.

“Fires are blazing so brightly, smoke reaching so far, Nasa satellites can see them one million miles away in space,” he added.

More than a hundred wildfires continued to threaten the western states of California, Oregon and Portland, and have caused the deaths of dozens of people.

“With every bout with nature’s fury cased by our own inaction on climate change more Americans see and feel the devastation … its happening everywhere, it’s happening now and it affects us all,” Mr Biden said.

Donald Trump has largely remained silent on the ongoing fires until last week when he commended the “28,000+ Firefighters and other First Responders who are battling wildfires” across the west coast.

The president has claimed the wildfires have been caused by poor forest management, and a lack of raking. Experts, in contrast, say the fires, which occur annually in the area, have become more frequent and more intense as result of climate change.

The remarks also comes just as than 170 leading environmentalists urged people to back Mr Biden, saying that a “protest vote” for a third party could allow Mr Trump to be reelected.

“Only by rallying behind the Democratic Party can we end the Trump administration’s unprecedented malignancy, fear mongering, pathological lying, and atrocious policymaking. This is not the year to make a utopian statement or to waste a single vote,” says a public letter released on Monday.