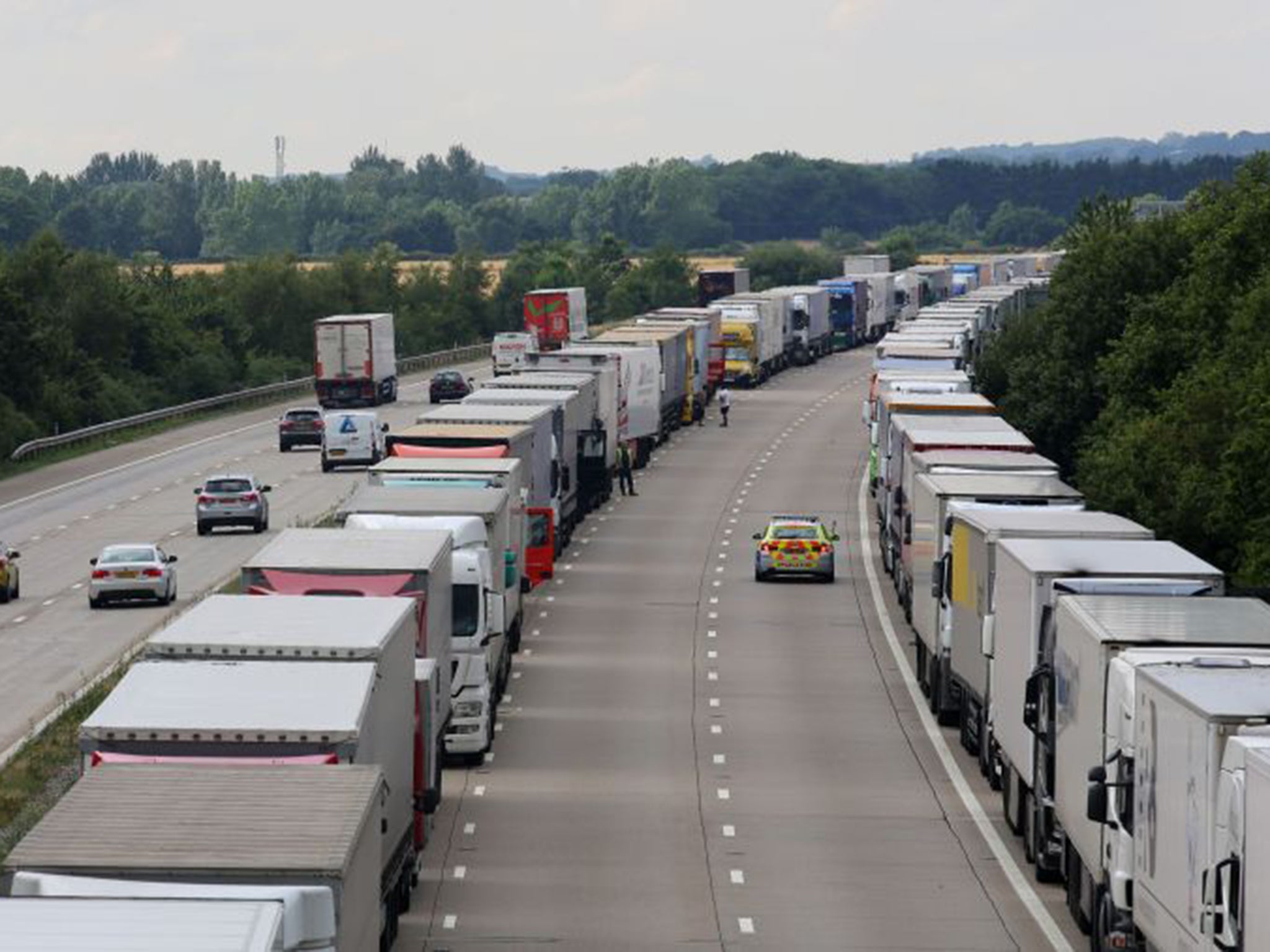 Thousands of lorries could be stuck in queues for up to two days to cross the Channel to Europe after the UK transitions to Brexit on 1 January, according to an official report.

The 46-page document presented to the government’s XO (exit operations) committee last week sets out the possibility of massive disruption in the county of Kent, whether or not Boris Johnson manages to secure a free trade agreement in the currently stalled talks with Brussels.

A “reasonable worst-case scenario” says that queues of up to 7,000 trucks may clog up roads approaching Channel ports in the first weeks of 2021, while thousands of passengers could also be forced to wait as long as two hours to board a Eurostar train through the Tunnel.

The paper, drawn up by the Border and Protocol Delivery Group and obtained by The Guardian, warned that a crucial IT system to be used by hauliers preparing documentation for the Channel crossing is not expected to be publicly tested until November.

The government estimates that at least 200 million additional pieces of paperwork will have to be filled in by exporters each year as a result of Brexit, at a cost estimated by HM Revenue and Customs at up to £20 billion annually – significantly more than the UK’s annual contributions to EU budgets.

The new paper forecast that 50-70 per cent of large businesses will be ready for the new bureaucratic burden imposed on cross-border trade, but that as few as 20-40 per cent of small and medium-sized companies will know what to do from New Year’s Day.

The reasonable worst-case scenario set out to the XO committee, chaired by Michael Gove, would see 30-60 per cent of trucks being ready for the new arrangements.

“It is estimated a maximum queue of 6,500 HGVs may develop in January,” the report said.

Because of the lull in business activity over the Christmas and New Year period, disruption can be expected to be “lower in the initial days of January”, it said.

But it added: “We would expect sustained disruption to worsen over the first two weeks as demand builds.

“Considering demand levels in the first week of February, it is estimated that if readiness does not improve by then, queues could reach a length of 7,000 HGVs.

“In each case it is estimated that HGVs could take two days to reach the front of the queue.”

The paper also warned that passengers on Eurostar and at airports could face “significant disruption” if UK nationals are not allowed to use e-gates.

New border controls at London’s St Pancras station “could lead to queues of many thousands” for Eurostar services to Paris, Brussels and Amsterdam, the document said. It added that Eurostar “has committed to mitigate this scenario, including in extremis cancelling services”.

The document described preparations for  post-Brexit border operations as all-consuming, involving 26 government departments using 100 IT systems, some of which cannot legally share data with others

Operation Fennel contingency plans drawn up by Kent authorities to cope with queues will be frustrated unless a “smart freight system” is ready in time, the report warned.

The system will provide a “Kent access permit” to lorries with the right documentation, allowing them to proceed to Channel ports like Dover. However, it is unclear whether those without paperwork will be prevented from entering the county or required to go to a lorry park for clearance.

So far, the government has confirmed plans for the construction of one lorry park in Ashford, Kent, with legislation granting powers for more in 29 council areas near ports and airports around the country.

The new document calls for advice centres to be set up at truck stops and service stations on all main motorways to help hauliers prepare their papers for onward journeys to ports.

A Cabinet Office spokesperson said: “”At the end of the year we will be outside the single market and the customs union, whatever the outcome of negotiations. There are a range of actions that businesses will need to take to prepare so that they are ready to take advantage of the opportunities and changes that it will bring.

A spokesman for Eurostar said: “Eurostar is working closely with station partners, governments and control authorities on both sides of the Channel to ensure that robust plans are in place for a range of scenarios to protect services and to manage customer flows effectively.“

The 20 most hated TV finales of all time, ranked

The 20 most hated TV finales of all time, ranked

James Bond films: Every 007 movie ranked in order of worst to best