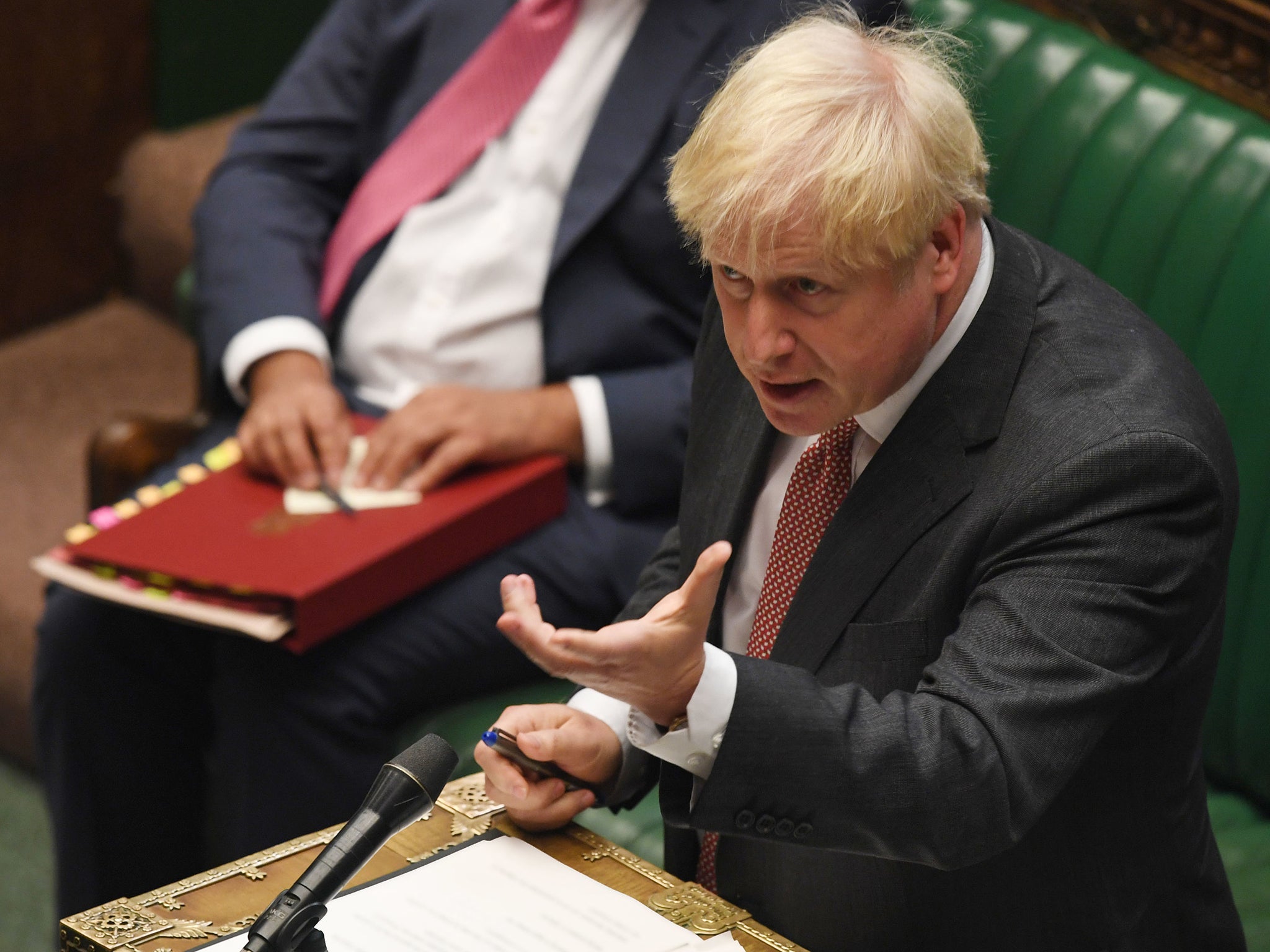 Boris Johnson’s controversial proposal to tear up part of the Brexit treaty with the European Union passed through the House of Commons on Monday by a majority of 77 despite a rebellion among Tory MPs.

Shadow business secretary Ed Miliband accused the prime minister “legislative hooliganism” as he warned the Bill would “equip the government with the power to break the law” in a widely-praised speech leading Labour’s opposition in the Commons.

The former Labour leader also accused the prime minister of trying to shift the blame for reneging on the Withdrawal Agreement on which he fought last year’s general election, saying:  “For the first time in his life, it is time to take responsibility, it is time to fess up.”

Meanwhile, Sir Keir Starmer will urge the government to replace the furlough scheme to avoid the “scarring effect” of mass unemployment in a speech to the Trade Unions Congress conference later on Tuesday.

The Internal Market Bill has been described as “hugely damaging” to the UK’s international reputation by the former UK ambassador to Washington.

Kim Darroch — who was forced to resign as US ambassador last year after critical remarks he made about Donald Trump’s administration were leaked — said the Bill, which would violate the Withdrawal Agreement signed with the European Union last year, would damage chances of getting trade deals with the US and Brussels along with causing enduring damage to the UK’s international standing.

“It’s potentially hugely damaging to our international reputation. It puts at risk future international agreements, if people think the Brits are just going to say: we didn’t like this on reflection, and we would like to rewrite this part unilaterally,” the former diplomat told The Guardian.

Following a warning from US speaker Nancy Pelosi that there will be “absolutely no chance” of a trade deal with Britain passing congress should the UK government override the Withdrawal Agreement, Mr Darroch said: “The UK-US deal is at risk because, even if Donald Trump is reelected, it’s quite hard to see the Republicans taking back the [House of Representatives].

“And as long as the House is in Democratic hands, the leadership have made it clear that a UK-US free trade deal wouldn’t be possible if we put at risk the Good Friday agreement.”

Mr Darroch also suggested some damage may already have been done by the UK government’s apparent willingless to break international law even if the Bill were to be withdrawn, saying: “If we were to back down or find a way through with the EU, that would limit the damage, but the fact that we contemplated it is still damaging.”

A decision was taken last week by Northern Ireland’s Environment minister to halt planning for border posts in the Irish Sea following a meeting with senior party figures, it has emerged.

Stormont minister Edwin Poots, who was appointed in May to lead preparations for post-Brexit border checks at Northern Irish ports and airports, put a stop to planning days after a meeting with senior Democratic Unionist Party figures in which he was urged to do so, the Belfast News Letter reports.

The decision to halt works followed an interview with Arlene Foster on Sky News in which she stated she would implement Boris Johnson’s Brexit deal creating the new trade border in the Irish Sea and suggested more money from London would offset damage caused to the Union.

Ms Foster is understood to have been present at the meeting where planning was urged to come to a stop although it is not clear what position she held during.

Priti Patel said she would call the police on people flouting the new “rule-of-six” adding that families should not mingle with friends they bump into on the streeet.

“If I saw something that I thought was inappropriate, then quite frankly I would effectively call the police,” the home secretary told Sky News.

“It’s not about dobbing in neighbours, I think it’s all about us taking personal responsibility. If there was a big party taking place, it would be right to call the police.”

Asked to define “mingling”, which is a criminal offence under the new regulations, the home secretary said it was “people coming together” and that two families of four stopping to chat in the street would be in breach of the law.

A leaked report shows the government is preparing for the ‘worst case’ scenario for delays to cross into the European Union with warnings of 7,000 lorry queues in Kent.

The document, prepared by the Border and Protocol Delivery Group, also predicts thousands of passengers could face two-hour delays for Eurostar trains.

A spokesperson for the Cabinet Office said in a statement the report reflects a “stretching scenario” whereby the worst case outcome is considered as opposed to a prediction.

The leak follows a warning from the Unite union that Britain’s ports would be “chaos and confusion” in the new year unless planned lorry parks and essential customs software are completed.

An essential IT system used by lorry drivers will not be tested until the end of November, one month before the UK’s transition period ends, according to the report.

In an address to the TUC annual conference, the Labour leader will repeat the party’s demand for a targeted extension of the  job retention scheme along with a ban on “firing and rehiring” practices which have seen some employees made redundant and then brought back on for worse pay and conditions.

He will tell the prime minister: “Get your priorities right. Get on with defeating this virus.”

Ed Miliband took to the desptch box last night with a scathing speech against the prime minister’s plan to break international law through the Internal Market Bill.

The former Labour leader, now shadow business secretary, accused the prime minister variously of incompetence, “legislative hooliganism” and seeking to shift the blame for reneging on the Withdrawal Agreement.

Clips from Mr Miliband’s widely-praised 25 minute speech can be seen below:

Good morning and welcome to Tuesday’s liveblog. We’ll be bringing you all the latest updates on UK politics after last night’s vote on the Brexit Bill