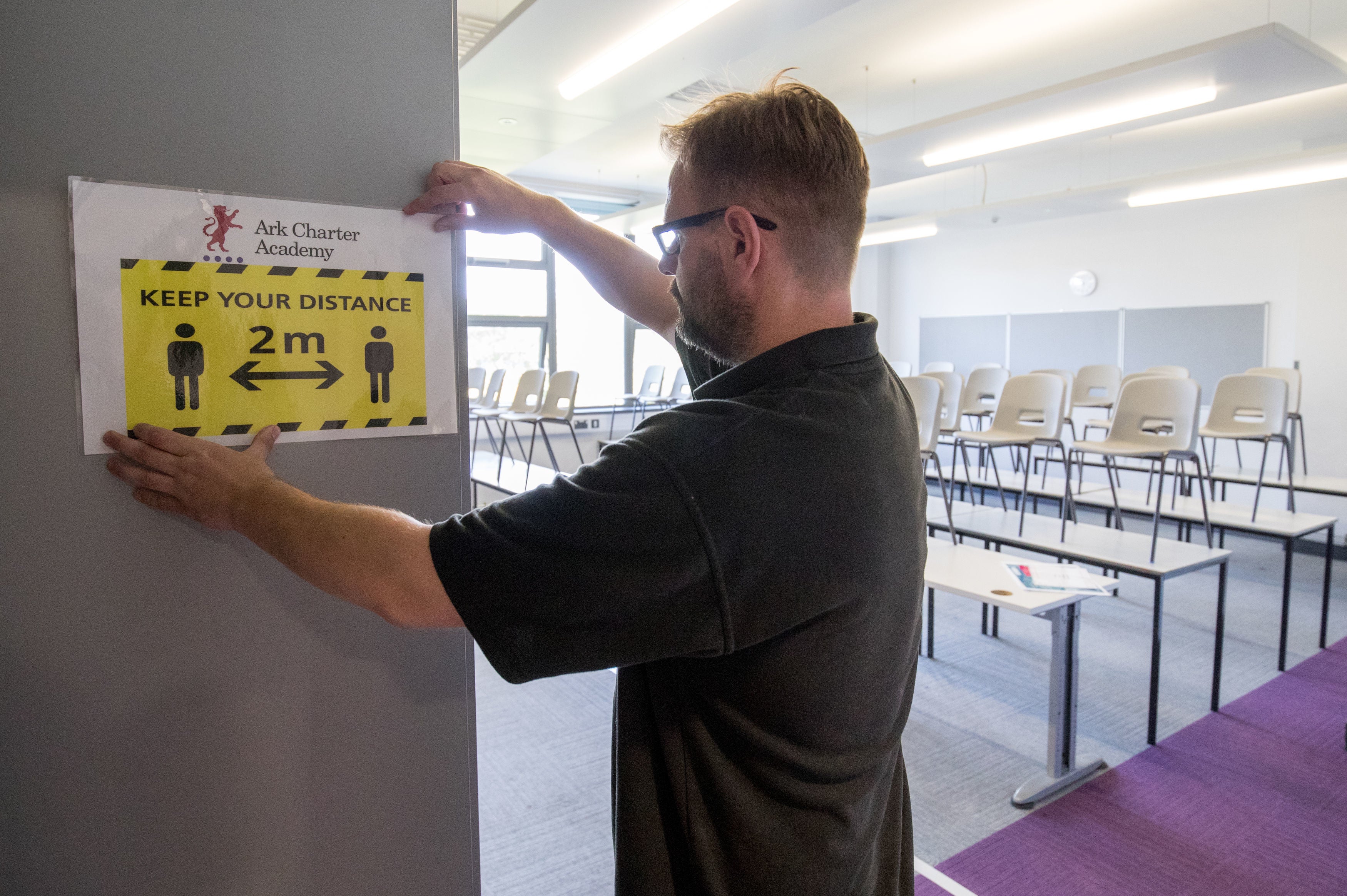 Gavin Williamson has been warned the government could face legal action for exposing teachers to coronavirus, after an online survey found less than a quarter (23 per cent) believe that sufficient measures have been put in place to make schools safe.

The warning came as the Department for Education announced that more than 99 per cent of state schools in England have reopened to some or all students for the autumn term and 88 per cent of pupils – more than 7 million young people – were back in the classroom last week.

The general secretary of teaching union NASUWT wrote to Mr Williamson to demand better resourcing and monitoring of Covid-secure measures, after a straw poll of almost 1,000 school teachers found that 55 per cent did not regard the protections in place at their schools as “sufficient and effective”. The snapshot survey was self-selecting and does not meet the scientific standards of mainstream polls, but the union nonetheless believes it reflects a level of concern among teachers.

Patrick Roach told the education secretary that the union was “expressly reserving our members’ legal rights” in the case of a claim for breach of duty of care or personal injury due to foreseeable risks resulting from the government’s decision to tell schools to reopen to all pupils in September after five months of lockdown when only vulnerable students and the children of key workers were attending.

Dr Roach wrote: “With rising numbers of confirmed Covid-19 cases in the wider community, our members are deeply concerned that, in the absence of effective control measures, there is increased risk of Covid-19 transmission within schools.

“We further note with concern that your department is unable to provide any evidence on the effectiveness of the risk control measures recommended in your guidance to schools. Furthermore, you will be aware of the increasing number of schools where pupils and staff have tested positive for Covid-19 or are required to self-isolate.”

Statistics produced by the DFE showed that, as of last Thursday, only 1 per cent of schools were unable to open fully because of coronavirus, while the disease had forced the complete closure of just 0.1 per cent. Closures have so far involved unusual cases, such as infections among staff at very small schools.

Current guidance requires schools to send pupils showing symptoms of coronavirus home to get tested, with a positive result leading to those who have been in close contact with the infected child being asked to self-isolate for 14 days. Only in cases of wider outbreaks have year-groups or in extreme circumstances whole schools been sent home.

Head teachers have been given discretion to develop tailored measures to make their schools Covid-secure, in line with the practical realities of the premises.

The NASUWT survey found that 67 per cent of teachers taking part reported social distancing measures being in place at their schools, with 70 per cent saying cleaning had been stepped up, 69 per cent that pupils and teachers had been given better access to soap and water, 82 per cent that hand sanitiser had been put in every classroom and 76 per cent that movements were controlled through systems such as staggered start times.

Just 11 per cent said that more use was being made of outside space for lessons, and 25 per cent that ventilation had been enhanced.

Dr Roach said concerns had been raised about the heightened risk for vulnerable teachers – including those with underlying health conditions and members of ethnic minorities shown to be at greater risk from Covid – as well as a lack of additional funding forcing schools to take decisions on cleaning and the provision of protective equipment on cost rather than health grounds.

And he said depleted staffing numbers due to illness and self-isolation was resulting in “serious operational difficulties for schools in maintaining safe working practices at all times”.

“The evidence from our preliminary polling raises further concerns about the urgent need for stronger protections to be introduced to ensure the Covid-secure working practices that the government has promised,” he told Mr Williamson.

“In accordance with the prime minister’s commitments on behalf of the government, our members have the right to the same considerations and protections in their workplaces that are being applied to other groups of workers. The NASUWT’s expectation is that your department will have conducted appropriate checks on the compliance by schools with your guidance and that you will have made provision for suitable ongoing monitoring and compliance arrangements.”

Unveiling today’s statistics on school reopening, Mr Williamson said: “The best place for children and young people to learn is in the classroom, and it’s encouraging to see that last week more than seven million pupils were back with their classmates and teachers at schools around the country.

“I do not underestimate the work staff have done to put in place the protective measures required to reduce the risk of transmission. But as the UK’s chief medical officers have already made clear, the risk of catching coronavirus at school is low, meaning that the wider risks to children being out of school is, in fact, far greater.

“The fact that the vast majority of our schools are fully open is testament to the hard work of staff throughout the summer holidays in preparing for a safe return. I cannot thank them enough for all that they have done, and for the tremendous resilience they have shown and continue to show every day. We’ll also continue to work with schools, local authorities and parents to make sure as many children as possible attend school.”

– The NASUWT carried out a self-selecting online snapshot survey of members on its website, to which 929 teachers responded between 3 and 13 September

‘He has no plan’: Biden mocks Trump’s repeated promise of an infrastructure strategy

‘They are the necessary heroes’: Love Actually director Richard Curtis on bankers’ starring roles in the climate crisis