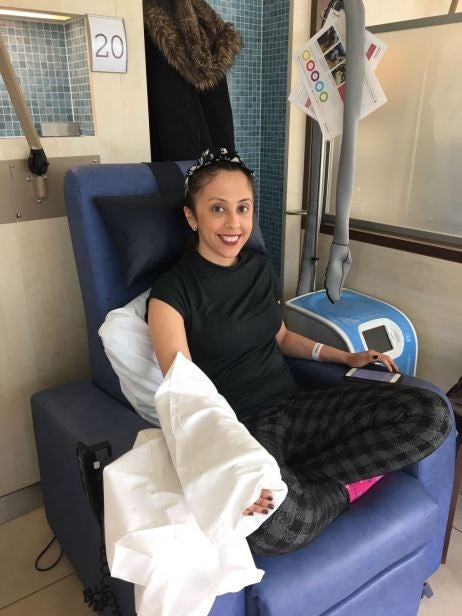 very day 58 women in the UK are diagnosed with a gynaecological cancer , according to The Lady Garden Foundation. But during lockdown this has stalled. Cancer Research UK has reported that over two million cancer screenings, tests or treatments have been missed because of Covid-19, and the Institute for Public Policy Research reported a 43 percent drop between April to June this year (339,242 people in total) in urgent two-week wait referrals from GPs for diagnostic tests compared to 2019 (594,060 people). On Tuesday, health secretary Matt Hancock said the backlog of people waiting for screening has fallen “by about half”. But Laura Moses, age 31, is worried about what the continued delay means for others like her.

I was diagnosed with ovarian cancer in June 2016 at 27 years old. Over the course of three weeks I had started experiencing really awful stomach cramps and constipation; I felt bloated and it never went away. It got to the point where my stomach had swelled so much I looked like I was three months pregnant and one day while I was driving I had to pull the car over because I was in so much pain.

I’d been told it was Irritable Bowel Syndrome (IBS) or something gastrointestinal and my symptoms had nothing to do with my ovaries, despite the fact that I carry the BRCA1 gene mutation [BRCA1 is a gene that produces proteins to suppress tumours in the human body. Mutations in this gene and BRCA2 gene notably increase the risk of breast and ovarian cancer, says the NHS].

As the symptoms persisted I decided to go to A&E and they gave me a blood test, which revealed abnormal results. This led to them doing a CT scan, which revealed a swelling on my right ovary. The gynaecologist expressed his concerns about ovarian cancer.  I felt like the earth had opened up and swallowed me. I just felt numb. Because I had been told it was IBS, I never imagined it would be cancer.

I was transferred to the Royal Marsden hospital, a specialist cancer treatment unit. I was there three days, had five litres of fluid drained from my stomach and had a biopsy. It didn’t take long for the results to come. My dad decided we should call the cancer “Cyril” to better deal with it. It made the whole thing feel less frightening (although it did confuse my friend when I said in a text that it might be Cyril…).

In the end I underwent nine weeks of chemotherapy followed by an operation, called radical debulking, to remove my womb, cervix, ovaries, fallopian tubes, appendix, and a huge part of my diaphragm. My bowel was also cleaned and any spots on the bowel or liver were removed. I had a further nine weeks of chemo followed by a year of maintenance treatment (a medication called Avastin).

After two and a half years in remission (with no treatment), a routine scan picked up a small, suspicious nodule behind my bowel but it wasn’t yet clear enough to know what it was. Possibly areas of scar tissue from my previous surgery, possibly something benign and unimportant, or possibly something not good. What came next was a horrible six weeks of watch and wait.

It was exactly how you can imagine a six-week wait would be. Horrendous. The hardest thing about this was that it started in the lead up to my wedding. My family and friends tried as much as possible to keep me busy and distracted with whatever they could think of. But as with most forms of distraction it does just that; distracts for a bit but doesn’t stop the fear.

It was indeed a recurrent tumour, with cancer inside, which we named Boyd. I had keyhole surgery to remove it and thankfully, all evidence of disease was removed with him.  I am just over one year clear (after a small relapse in 2019) and I have adjusted well to the daily medication. The plan is to go ahead with preventative breast surgery in December 2020 (also because of the BRCA1 mutation).

I thank God that the symptoms surfaced and I was able to get to hospital quickly and get a treatment plan in place. I was diagnosed with cancer on a Thursday and the treatment started the following Monday. It worries me that women with ovarian cancer symptoms might feel too anxious to seek help because of coronavirus.

There is a real fear that a cancer pandemic could be looming on the back of this. We want to strive to ensure that ovarian cancer statistics do not rise and now more than ever we need to push to be seen if we have symptoms.

Early diagnosis leads to a better prognosis. And the government is urging us to seek help if we need it. Women know their bodies the best. I remember what it was like to be diagnosed back in 2016 and I want to do all that is in my power to stop this from happening to others.

Should I attend a cancer screening?

Dr John Butler, medical director of The Lady Garden Foundation and consultant gynaecologist at The Royal Marsden Hospital says: “As services now return to a new normality it is vital that people attend their screening tests for cervical, bowel and breast cancer and see their doctor if they have symptoms of concern. The NHS is very much open for business and operating in a Covid-secure environment.

“There is a major concern that a fall out from the priority that has been given by the health service and government to managing coronavirus, will cause delayed cancer diagnosis and treatment. Furthermore the charity sector is seeing a major reduction in fundraising which is limiting lifesaving research.”

These are the six most common cancers in women and the common symptoms to be aware of:

Cervical cancer: Dr Butler recommends anyone who was due to have a cervical screening that was postponed, now reschedules their appointment. Likewise, if anyone is experiencing any persistent changes to their regular cycle, post menopausal bleeding or are experiencing symptoms that are not normal for them, to seek medical advice.

Breast cancer: This guide provides step-by-step advice on how, when and what you should be looking for when you check your breasts. The NHS states that lots of women have breast lumps and that nine out of 10 are not cancerous.

Ovarian cancer: The most common symptoms of ovarian cancer are bloating, pelvic or abdominal pain, trouble eating or feeling full quickly, and changes in urinary habits. Other symptoms include extreme tiredness, back pain, constipation or pain during sex.

Skin cancer: The NHS says the first sign of non-melanoma skin cancer is usually the appearance of a lump or discoloured patch on the skin that persists after a few weeks. “See a GP if you have any skin abnormality, such as a lump, ulcer, lesion or skin discolouration that has not healed after 4 weeks. While it’s unlikely to be skin cancer, it’s best to get it checked”.

Bowel cancer: These include a persistent change in bowel habit – pooing more often, with looser, runnier poos and sometimes tummy (abdominal) pain, or blood in the poo without other symptoms of piles, or abdominal pain  when eating. See your GP if you have one or more of the symptoms of bowel cancer, and they persist for more than four weeks, says the NHS.

Lung cancer: The NHS says you should see your doctor if you have any of the following; a cough that doesn’t go away after two or three weeks, recurrent chest infections, coughing up blood, persistent breathlessness,  loss of appetite or energy.