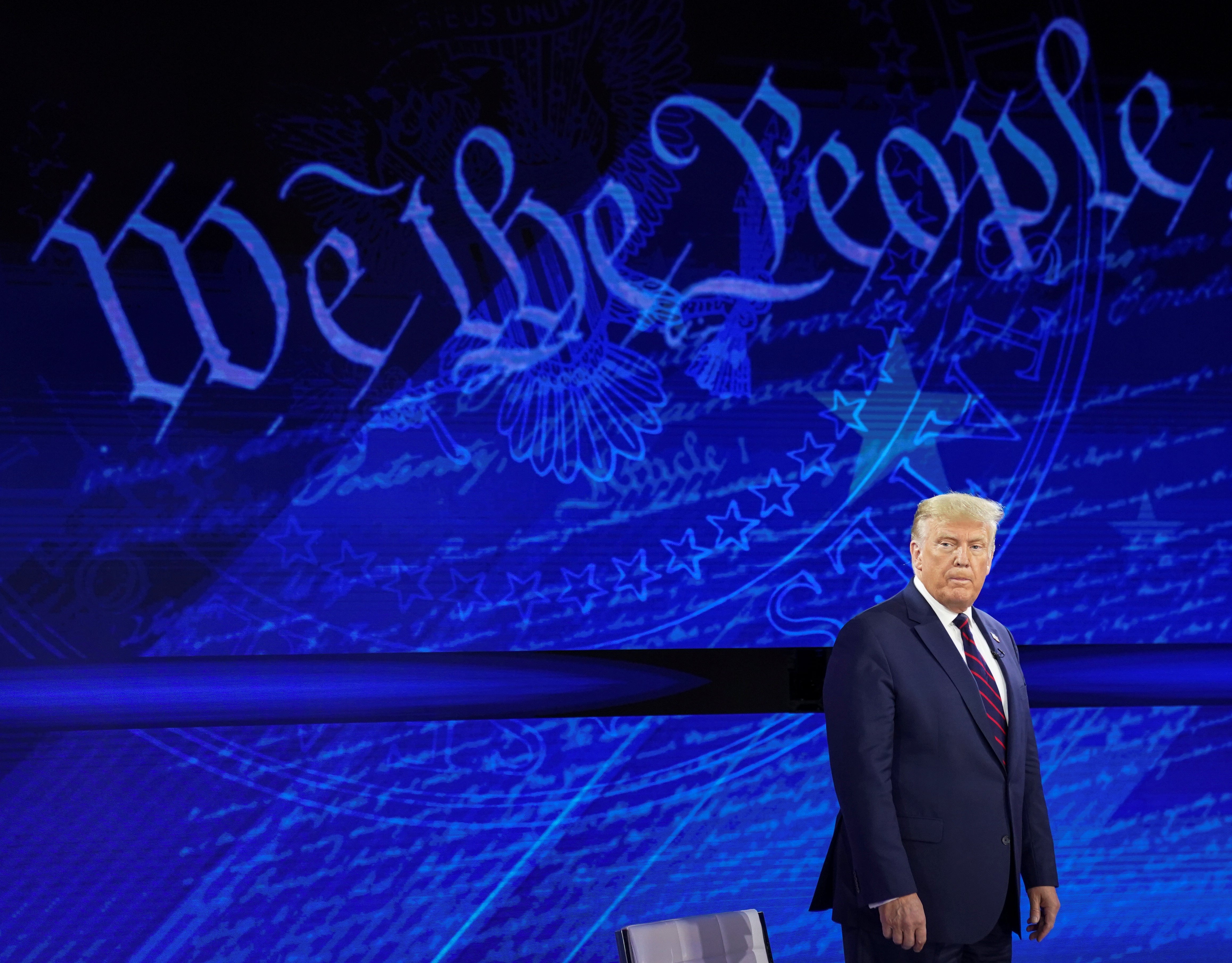 Donald Trump said the director of the CDC was “contradicting himself” after testifying before Congress that a vaccine would not be widely available until mid-2021 and that wearing face masks were more effective than a vaccine.

Asked about the testimony during a marathon press conference late on Wednesday, the president said that Mr Redfield was “mistaken” on both occasions, and either didn’t understand the question or wasn’t fully aware of the facts when giving out wrong information.

While Mr Trump said he still had confidence in Mr Redfield, another top health official took a sudden leave of absence after promoting wild conspiracy theories warning people to stock on ammunition ahead of an Antifa-led, left-wing insurrection.

Michael Caputo was said to be taking a leave for the next 60 days “to focus on his health” after he claimed there was a “resistance” against the president at the CDC. The spokesperson also alleged Joe Biden would refuse to concede the election if he were to lose against Mr Trump.

The president shared a meme on Twitter pushing a conspiracy theory that insinuates left-wing Antifa activists started the California wildfires on purpose.

The biggest threat to the election, the president said, were the millions of paper ballots controlled by Democratic governors that were vulnerable to forgeries and “things that will blow your mind” from Russia, China and other countries.

Mr Trump said those same governors need to open their states because lockdowns were hurting “far more” people than coronavirus, before saying coronavirus was one of the most contagious virus the world had ever seen.

The president suggested an October vaccine was closer than most people understand, and called on Mr Biden to stop promoting anti-vaccine theories that would recklessly endanger lives.

Please allow a moment for our liveblog to load

Donald Trump has come under fire for mistakenly telling a participant of Tuesday night’s ABC News town hall that her mother, who died of cancer, suffered from Covid-19.

As Flor Cruceta became emotional during the event in Pennsylvania, Mr Trump asked “did you say your mum got Covid? Your mum?” Holding back tears, she remembered how she and her mother immigrated from the Dominican Republic in 2006 to live their American dream.

“She had breast cancer but it made metastases on her brain, bone, and lungs and she passed on the 19th,” Ms Cruceta said.

“I’m here because of her. She was supposed to be here and ask you and thank you for this — if they should take — during this epidemic, you made people closer. We lost our jobs but we learned how to love our family. So I’m saying that from her.”

After being asked what he would do to make the immigration system easier for families like hers to become citizens and vote, Mr Trump went into his answer about a merit-based system before returning to Ms Cruceta’s mother.

“I mean as far as your situation with your mother, that is just devastating because I can imagine how you feel and it sounds like a great woman,” Mr Trump began.

“The love that you have for your mother, I can see that, it’s hard. And so many people and they die alone. They die alone because this is such a vicious thing. You can’t go there and hold their hand. You can’t give them a kiss good night. It’s a terrible, terrible thing. And hopefully the vaccines are going to be very soon, hopefully. Did you have Covid? You didn’t have it right?”

Trump said on Wednesday he was waiting for a report on the Oracle TikTok deal on Thursday, but from media reports he wasn’t considering approving a deal if ByteDance kept a majority stake in the business.

“No, I’m not prepared to sign off on anything,” Trump said. “They going to be reporting to me tomorrow morning and I’ll let you know.”

Asked how the American public could trust him on the coronavirus after twice contradicting the CDC director Robert Redfield today, Trump said he’s ‘contradicting himself’

Mr Redfield said testified before Congress today that a coronavirus vaccine would not be widely available to the public until mid-2021 and that wearing face masks would be more effective than a vaccine.

They were two claims the Mr Trump said the CDC director was mistaken on, gave the wrong information about, didn’t correctly understand the question, or wasn’t fully aware of the facts.

The president was asked if he still had confidence in Mr Redfield after being contradicted by him twice in one day.

The president said director of the CDC, Robert Redfield, was mistaken when he told a Senate hearing today that masks were more effective than a coronavirus vaccine.

“When I called up Robert today, I said to him, what’s with the mask, he said, I think I answered that question incorrectly, I think maybe he misunderstood it,” Trump said.

Earlier on Wednesday, Mr Redfield said masks were the country’s best defence to the spread of the coronavirus.

“I might even go far as to say this face mask is more guaranteed to protect me against Covid, than when I take a Covid vaccine because the Immunogenicity may be 70 per cent, and if I don’t get an immune response the vaccine’s not going to protect me,” Mr Redfield said.

A day earlier, Mr Trump told ABC’s George Stephanopoulos that “a lot of people” questioned the effectiveness of wearing masks when discussing the coronavirus response.

When Mr Stephanopoulos asked which people don’t think masks are a good idea, the president pointed to waiters and, in previous statements, Dr Anthony Fauci and the CDC.

But at the White House today, Mr Trump said his comments were inaccurately covered after he was cut off during the town hall.

“They always cut my sentences off, they cut it off, on masks, masks have problems too and I talked about the masks have to be handled very gently very carefully. I see that in restaurants people with mask and they’re playing around with masks and they have fingers in their masks, and then they’re serving with plates, I mean I think there are a lot of problems with masks,” he said.

“No, vaccines are much more effective than masks and if we get the vaccine, added to the fact that our numbers are going way down… but no the mask is not as important than the vaccine. The mask, perhaps helps.”

“His book is sort of obsolete because the book comes out, by the way I read the book last night very rapidly because it was very boring,” Trump said.

The president today said millions of ballots being sent out for mail in voting was the biggest threat to the election, as they made it easier for foreign interference.

“The biggest problem we have, right now, are the ballots. Millions of ballots going out that’s the biggest problem. When you talk about other countries whether it’s China or Russia or many others who get mentioned, they’re in a much better position with these paper ballots to do something than they would ever be under the old system, and that’s our biggest problem,” Trump said.

“Our biggest threat to this election are governors from opposing parties controlling ballots, millions of ballots, to me that’s a much bigger threat than foreign countries.”

He added: “As far as China’s concerned, and Russia, they say North Korea they say Iran, they say places, who knows, who knows, but they say all these different places, they can make forgeries of these ballots, they can do things that will blow your mind, and the Democrats know it’s wrong.”

Trump said today that the director of the CDC, Robert Redfield, was confused or misunderstood the question when he said the coronavirus vaccine wouldn’t be widely available until mid-2021.

“No I think he made a mistake when he said that, it’s just incorrect information and, I called him, and he didn’t tell me that and I think he got the message maybe confused, maybe it was stated incorrectly,” Trump said.

The director of the Centres for Disease Control and Prevention said on Wednesday that face masks are more guaranteed to protect from coronavirus than taking a vaccine.

It comes a day after Donald Trump questioned the effectiveness of masks during ABC News’ town hall in Pennsylvania on Tuesday night.

Speaking at a Senate hearing on the federal coronavirus response, CDC director Robert Redfield said if all Americans embraced masks for six to 12 weeks, they would bring the pandemic under control.

“These actually, we have clear scientific evidence they work, and they are our best defence. I might even go far as to say this face mask is more guaranteed to protect me against Covid, than when I take a Covid vaccine because the Immunogenicity may be 70 per cent and if I don’t get an immune response the vaccine’s not going to protect me.”

“I’m calling on Biden to stop his anti-vaccine theories because all they’re doing is hurting the importance of what we’re doing and I know if they were in this position they’d be saying how wonderful it is,” Trump said.

“They’re recklessly endangering lives, you can’t do that, and again this is really a case that they’re only just started talking a little bit negatively and that’s because they know we have it, or we will soon have it.”

Trump expands ban on US money for certain diversity training