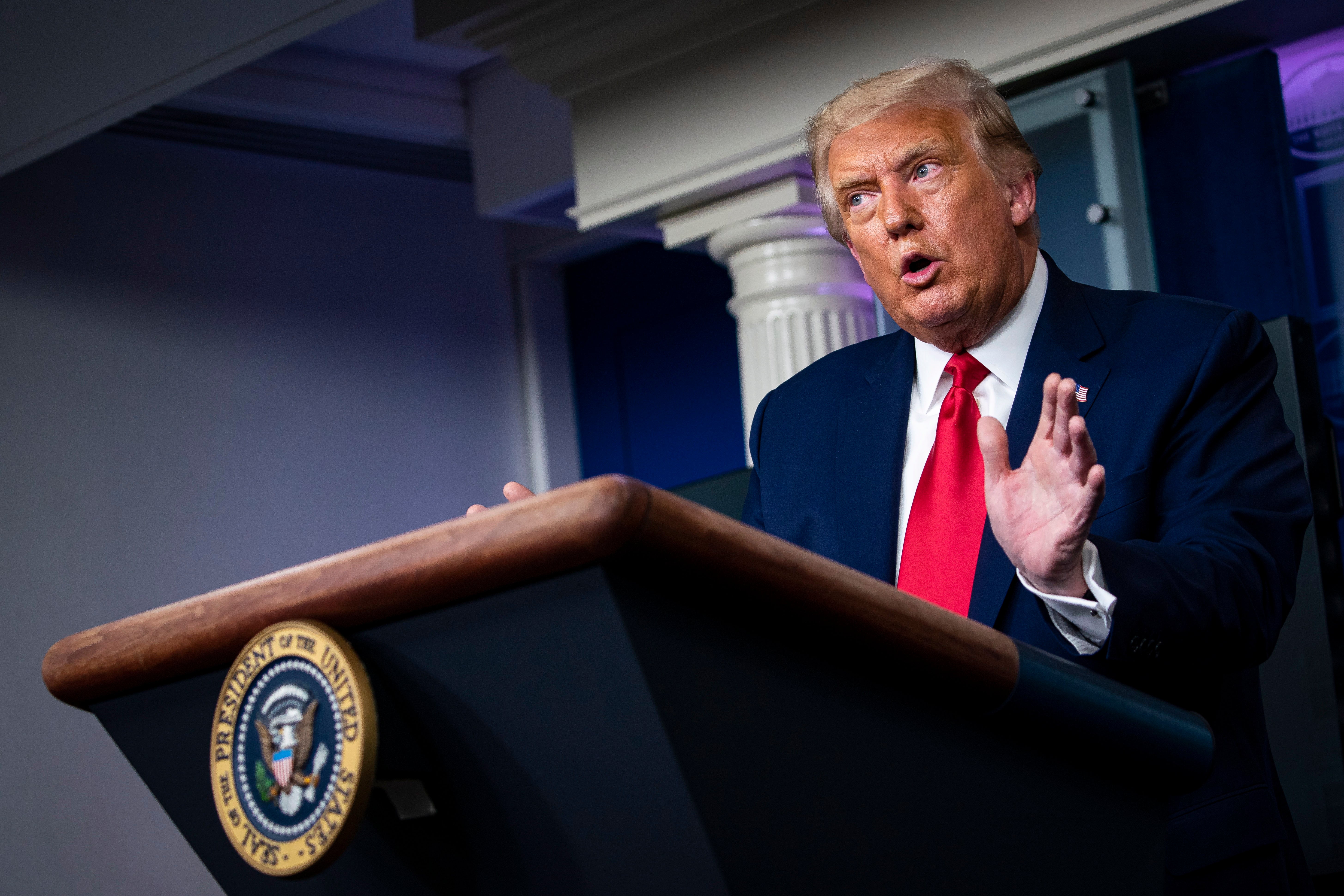 US president Donald Trump on Wednesday

Donald Trump has again been accused of sexual assault, this time by former model Amy Dorris, who alleges in an interview that he groped her and forced his tongue down her throat at the US Open tennis tournament in 1997.

The president has since begun his day on Twitter by claiming there will be “mayhem” on election night – 3 November – and alleging that an accurate final result may never be known due to postal vote tampering.

Even before all that, Trump was already under fire this morning for blaming Democratic-led states for the severity of the coronavirus crisis as the US approaches 200,000 deaths, suggesting the country’s mortality rate would be far lower “if you take the blue states out”.

Please allow a moment for our liveblog to load

Here’s Gino Spocchia on an extremely ill-considered analogy from the attorney general yesterday.

The president has been tweeting his fury at Democrats and Twitter itself this morning – in addition to forecasting the death of democracy.

God bless the Late Show host, still out there broadcasting  from home and sticking it to this administration at every opportunity.

Clemence Michallon is here to tell us what he had to say about the awkward end to the president’s call with the breakfast show on Tuesday.

For Indy Voices, here’s Max Burns to offer his assessment of Dr Redfield and company’s testimony to the upper chamber of Congress yesterday on the US response to the pandemic.

The lack of transparency about how billions of tax dollars are being spent isn’t the half of it, he says.

‘With 12 battleground states to win, it’s either candidate’s race to lose’

Yesterday’s latest national poll from Reuters/Ipsos put Biden a healthy nine points ahead of Trump with 48 days to go but here’s John T Bennett to explain why the field is still wide open for both sides and nothing should be taken for granted.

Inevitably, the president begins his day raving about postal ballots rather than by answering the latest credible sexual assault allegation against him.

A Republican who had several pro-Donald Trump signs stolen from his front lawn has now erected a small electric fence for protection.

The 54-year-old, John Oliveria, says he installed a small triangular fence after six signs with “Trump-Pence 2020” written on them went missing from outside his home in New Bedford, Massachusetts.

“It’s a shame I have to do this,” he told local news station, WJAR-TV, on Saturday. “I believe in the president. Obviously, people didn’t like it.”

Gino Spocchia has more on this.

Trump’s attorney general took aim at his own Justice Department on Wednesday night, criticising prosecutors for behaving as “headhunters” in their pursuit of prominent targets and for using the weight of the criminal justice system to launch what he said were “ill-conceived” political probes.

The comments at a speech at Hillsdale College in Michigan amounted to a striking, and unusual, rebuke of the thousands of prosecutors who do the daily work of assembling criminal cases across the country. Barr has faced scrutiny for overruling the decisions of Justice Department prosecutors who work for him, including in criminal cases involving associates of the president.

Rejecting the notion that prosecutors should have final say in cases that they bring, Barr described them instead as part of the “permanent bureaucracy” and suggested they need to be supervised, and even reined in, by politically appointed leaders accountable to the president and Congress.

“The men and women who have ultimate authority in the Justice Department are thus the ones on whom our elected officials have conferred that responsibility — by presidential appointment and Senate confirmation,” Barr said, according to his prepared remarks. “That blessing by the two political branches of government gives these officials democratic legitimacy that career officials simply do not possess.”

Barr himself has been aggressive as attorney general in pursuing certain categories of prosecutions, including using federal statutes to charge defendants in the unrest that roiled cities after the death of George Floyd. But he warned that prosecutors can become overly attached to their cases in ways that lose perspective and judgment, listing a series of prosecutions — including under prior administrations – in which he said he believed the government had taken extreme positions.

“Individual prosecutors can sometimes become headhunters, consumed with taking down their target,” Barr said. “Subjecting their decisions to review by detached supervisors ensures the involvement of dispassionate decision-makers in the process.”

Barr’s comments appeared to be a thinly veiled reference to the fracas that arose ahead of the February sentencing of Trump confidant Roger Stone. In that case, Barr overruled the sentencing recommendation of the line prosecutors in favor of a lighter punishment. The move prompted the entire trial team to quit before Stone’s sentencing hearing. Barr has defended his intervention as in the interests of justice.

In May, he sought the dismissal of the criminal case against former Trump administration national security adviser Michael Flynn, who pleaded guilty as part of special counsel Robert Mueller’s Russia investigation to lying to the FBI. Barr’s request is tied up in a court fight.

Though Barr was accused of undue intervention on behalf of the president’s associates, he bristled in his speech Wednesday night at the idea that it was even possible for an attorney general to meddle in the affairs of a department that he leads.

“Name one successful organisation where the lowest level employees’ decisions are deemed sacrosanct. There aren’t any,” Barr said.

He added: “Letting the most junior members set the agenda might be a good philosophy for a Montessori preschool, but it’s no way to run a federal agency. Good leaders at the Justice Department – as at any organisation – need to trust and support their subordinates. But that does not mean blindly deferring to whatever those subordinates want to do.”

Those weren’t his only contentious remarks, not by a long shot:

That appeared to be a reference to Michael Dreeben, a highly respected lawyer who argued more than 100 cases before the Supreme Court, under both Democratic and Republican administrations, during a decades-long career in the Justice Department’s solicitor general’s office. Dreeben was a senior member of Mueller’s team.

Matt Mathers has this report.

Dr Redfield was not the only CDC veteran giving his assessment of the pandemic yesterday.

His predecessor as director, Dr Tom Frieden, told CNN’s The Situation Room with Wolf Blitzer that the US approaching 200,000 deaths from Covid-19 was a “reflection of a failing national response”.

“The actual number is higher because not all deaths have been identified and this is just a horrifying number,” Dr Frieden continued. “It’s more people than die from suicide or overdose or homicide or HIV. In fact, Covid is on track to be the number three leading cause of death in all of the US for this year.”

Dr Frieden said he’s concerned that Americans will become “hardened” to the number of coronavirus deaths and lose sight of the total’s awful significance.

Also giving a press conference at the White House yesterday was Trump spokeswoman Kayleigh McEnany, given the unenviable task of having to justify the president’s many misstatements and losing her cool in the process.

She’s likely to be even busier today given this morning’s breaking news.

Here’s John T Bennett on her efforts to walkback Trump’s “herd mentality” gaffe during Tuesday night’s ABC town hall and joining him in predicting a coronavirus vaccine much sooner than the experts.

The Arsenal Lineup That Should Start Against West Ham