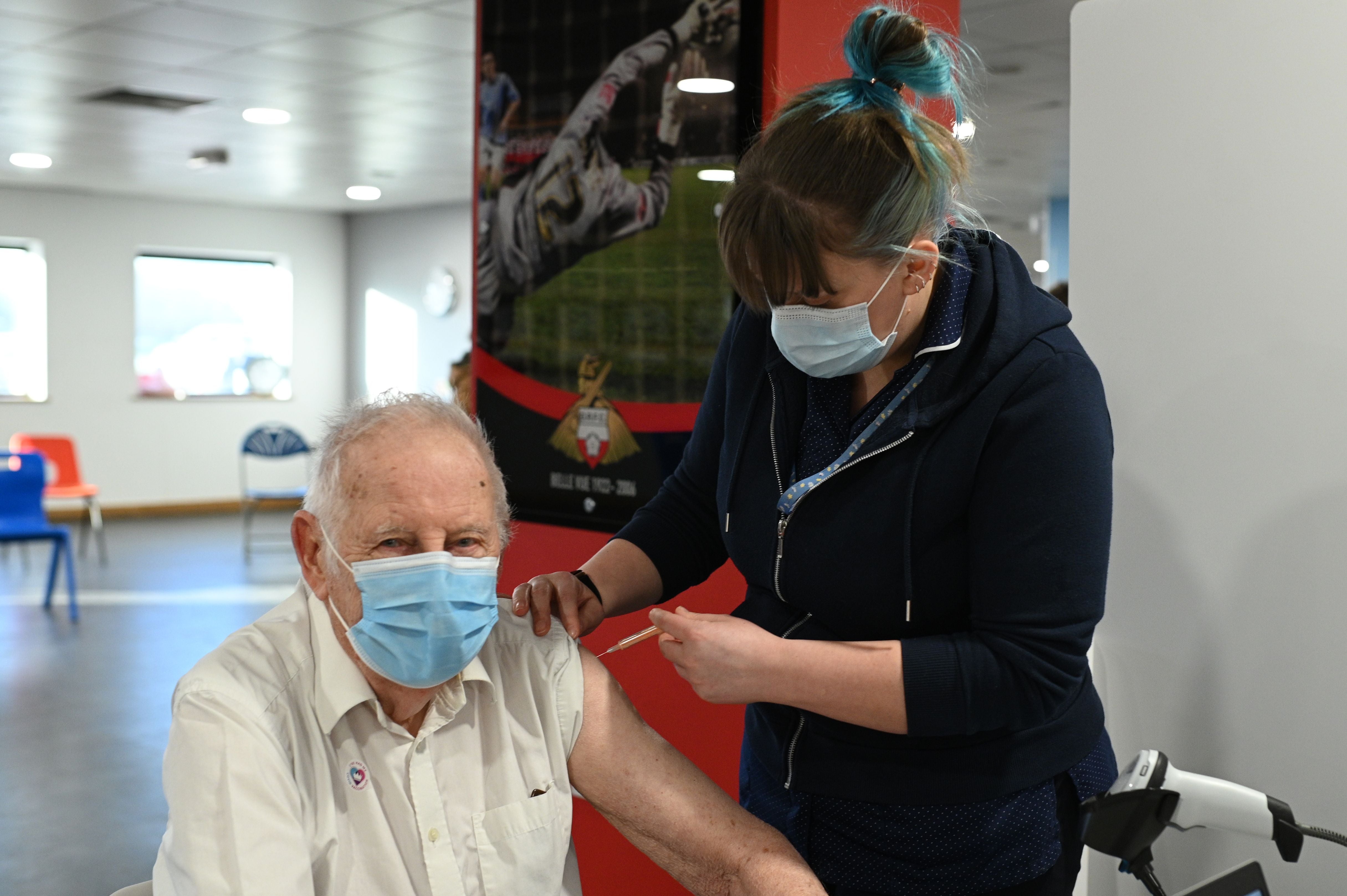 “They are under very close observation, and we have enhanced contact tracing to do everything we possibly can to stop them from spreading,” he told BBC News on Sunday.

It comes as he urged the British public to continue following coronavirus lockdown restrictions and stay at home, warning that any lifting of lockdown rules is a “long, long, long way off” as case numbers were “incredibly high” and the NHS remains under intense pressure.

Teachers have ‘good shout’ at being high on vaccine priority list

Teachers have a “good shout” of being high on the coronavirus vaccine priority list after the most clinically vulnerable, said Matt Hancock.

It comes after the Daily Mail reported of proposals for mass vaccination programmes for education staff over the February half-term.

Mr Hancock said: “It’s not a matter of logistics, the logistics can be organised. The challenge is the supply of vaccine, supply is the rate-limiting factor.

“The question is who should have each dose as it comes in… and we’ve taken the decision, quite rightly, to go through in order of clinical need, starting with those who are most likely to die from this disease.

“Of course we want to break the chains of transmission but we’ve also got to stop people dying from the disease if they catch it.

“We’re going through those who are clinically vulnerable… and after that there’s a perfectly reasonable debate to be had about who should go in what order next.

“Teachers have got a good shout to be very high on the list and those discussions are going on.”

Police disperse student party with guests from 200 miles away

Police in Birmingham broke up a student party which saw people travelling from up to 200 miles away on Friday night.

According to West Midlands Police, some partygoers were found hiding in cupboards and kitchen cabinets in the student accommodation in Lower Loveday Street. The force released footage of police finding the hidden students on social media.

Some attendees had travelled from as far away as Newcastle, Nottingham and London to attend the party.

50 fixed penalty notices were issued. During the raid, one officer was assaulted as a student escaped and police will be looking at CCTV to identify him. The officer was unhurt.

Inspector Steven Barnes said: “We understand that young people are frustrated at not being able to enjoy themselves and I do feel their pain, but we have to stick to the rules so that we can get back to some sort of normality sooner rather than later.

“People are dying and we have to prevent the spread of this virus.

“We hear the criticism that some are saying about our actions to police restrictions and, we more than anyone, want to concentrate on catching criminals, so my message is clear – stick to the rules and let us do our job of protecting communities and solving crime.”

Portugal held a presidential election today despite a devastating surge of Covid-19 cases gripping the nation.

Marcelo Revelo de Sousa, a moderate incumbent candidate, is strongly favoured to earn a second five-year term. However, Portugal has the world’s highest rates of new daily infections and deaths, according to Johns Hopkins University, and the public health system is under massive pressure.

Find out more about the situation there:

The UK has detected 77 cases of the South African variant of Covid-19, as well as nine of a Brazilian variant, the health secretary has said.

Matt Hancock told the BBC that all 77 cases were connected to travel from South Africa and were being monitored closely, as were the cases with the Brazilian variant.

“They are under very close observation, and we have enhanced contact tracing to do everything we possibly can to stop them from spreading,” he said.

Professor Anthony Harnden, deputy chair of the Joint Committee on Vaccination and Immunisation (JCVI), said the variants from abroad were of concern because available Covid-19 vaccines may not be effective against them.

He told Sky News: “The new variants abroad are a real worry. The South African and the Brazilian Amazonian ones, there are hints that there will be vaccine escape.”

Government needs to ‘get a grip’ on quarantining, says shadow home secretary

The shadow home secretary has called on the government to “get a grip and have that comprehensive plan in place” when it comes to quarantining travellers arriving in the UK.

“Only around three per cent of those were successfully contacted to ensure they were quarantining, now that just isn’t good enough, it isn’t effective. The Government hasn’t had a grip on this situation throughout. We desperately need them to get a grip and have that comprehensive plan in place.

“Even the meeting tomorrow and Tuesday that they’re talking about having should have happened on Thursday, even that is too slow. This can’t continue.”

Met Police issue £15,600 worth of fines at rave in London

Police have issued 78 people with £200 fines, totalling £15,600 after dispersing an illegal rave in London on Saturday.

Officers, including a dog unit and a police helicopter, raided the unlicensed music event which was attended by around 300 people at a railway arch in Nursery Road, Hackney, at around 1.30am.

The Metropolitan Police said officers had to force their way in as the organisers had padlocked the door from the inside. Dozens of those attending scaled fences to escape, added the force.

Chief superintendent Roy Smith, who attended the incident, said: “This was a serious and blatant breach of the public health regulations and the law in relation to unlicensed music events.

“Officers were forced, yet again, to put their own health at risk to deal with a large group of incredibly selfish people who were tightly packed together in a confined space – providing an ideal opportunity for this deadly virus to spread.

“Our frontline officers continue to police this public health crisis with compassion and professionalism but it is completely unacceptable they have to face such needless risks to their own health and to their families too.”

Vaccine rollout could be reconsidered if it prevents transmission

Professor Anthony Harnden, deputy chair of the Joint Committee on Vaccination and Immunisation (JCVI), has said the vaccine roll-out strategy might be reconsidered if it is found to prevent transmission.

He said currently teachers are not in the first four priority groups, because it is not known what impact the programme is having on the spread of the virus.

“One of the things we really don’t know, which is a key piece of information, is whether these vaccines prevent transmission or not.”

He added: “If studies do show they prevent transmission, it could be a whole new board game in terms of who you vaccinate and in what order.

“But at the moment our clear focus is trying to prevent hospitalisations and deaths.”

Matt Hancock has warned that lifting lockdown restrictions in England is a “long, long, long way off”, as case numbers were “incredibly high” and the NHS remains under intense pressure.

The health secretary said there was evidence that current restrictions were having an impact and the vaccination programme was making “brilliant progress”, but played down possibility of easing restrictions any time soon.

He told Sophy Ridge on Sunday: “There is early evidence that the lockdown is starting to bring cases down but we are a long, long, long way from being low enough because the case rate was incredibly high.

“You can see the pressure on the NHS – you can see it every day.”

The deputy chair of the Joint Committee on Vaccination and Immunisation (JCVI) has said that delaying a second dose of the Covid-19 vaccine might give stronger protection in the long term.

Professor Anthony Harnden said: “We carefully examined the data from the Pfizer study and concluded that there was no real evidence that a second dose gave you substantially longer and better protection.

“We do believe you should have a second dose but we do believe that that can be delayed.”

Speaking on Sophie Ridge On Sunday, Prof Harnden cited data from a study of the Moderna vaccine – which uses a similar technology to the Pfizer vaccine – which showed 1,000 people had 90 per cent immunity two months after receiving one dose.

He added: “If you look at the AstraZeneca data – which I accept is a different technology – it may be that the longer you leave the second dose the better protection you have.

“Hopefully not only will this strategy get more people immunised and protect the vulnerable elderly and save thousands and thousands of lives, it may in the end give protection to the population as a whole.”

Rapid coronavirus testing is being extended to dozens of businesses and public sector organisations to test employees who cannot work from home.

The Royal Mail, the DVLA and Tate & Lyle are among those employers who have signed up to the government scheme, which will deploy millions of lateral flow test kits.

Get the full story below:

Lady Gaga was not targeted in theft of French bulldogs, police say

Man stabbed wife and daughter to death then set himself on fire days into lockdown, inquest hears

Lady Gaga was not targeted in theft of French bulldogs, police say

Man stabbed wife and daughter to death then set himself on fire days into lockdown, inquest hears