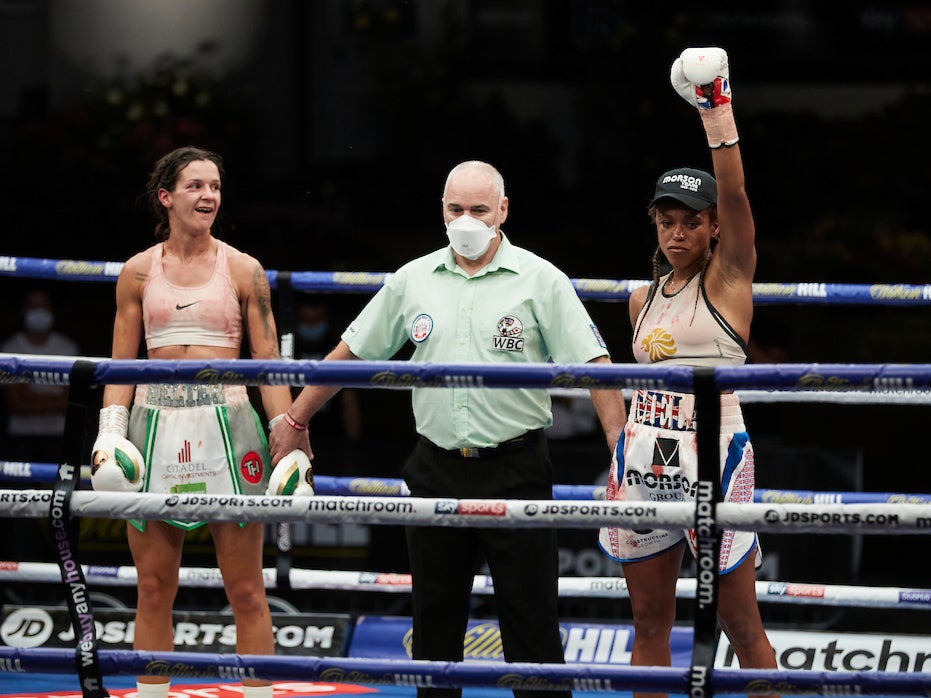 hen Savannah Marshall, a future Olympic and world champion, rode her bicycle to Hartlepool Headland Boys ABC, she brought with her the same stubborn love and fury born in every female boxer. Always the first to arrive, she shivered outside the gym, a literal and figurative outsider, until the head coach finally flung open the door.

“I’d be standing there for every single session no matter what. There was no female toilet or changing room, but it didn’t bother me. I’d train as hard as the boys, I’d get hit as hard, I wasn’t going to let anything stand in my way. A couple of months later, the sign came down,” she says with a proud smile. “Now it’s just Hartlepool Headland ABC.”

Before any breakthrough, it is those brave and individual acts of defiance, grating away at archaic conventions, that have made a year of such monumental change in women’s boxing possible. It is a shameful prerequisite that novice female fighters are faced with being refused entry, embarrassed or even brought to tears by their pursuit of a dream – or “walking into a man’s world,” as Marshall describes it.

“I always remember when I was about 13 years old and my club, Hartlepool, went to a recognised club in the North East,” she says. “I walked in and their coach, an oldish man, pointed at me and said ‘what’s that?’ in front of everyone. He said ‘there are no girls allowed in here’ and I had to sit and watch.”

For the vast majority of women who enter the sport, they are well-worn tales – a prejudice so prevailing that, in fact, it has long been the norm. But even once those barriers are overcome, there has until recently rarely been the promise of proper financial reward to make it worthwhile. “I was always doing it for the love,” says Marshall. “I was probably earning the same amount as someone on minimum wage.”

A miracle born out of disaster, women’s boxing has, perhaps, been sport’s biggest beneficiary of the pandemic. At Matchroom’s Fight Camp – a series of events situated in Eddie Hearn’s garden during the pandemic – Katie Taylor defended her world titles in a rematch with Delfine Persoon; Shannon Courtenay’s unbeaten record was shattered by Rachel Ball and Terri Harper and Natasha Jonas fought to a brutal and bloody split decision draw in the first all-British fight for a world championship.

The fights were thrilling, grimacing and unpredictable, the excitement often far outweighing the men, and the tide – in terms of exposure, perception, and even pay – is shifting. “I’ve felt like I’ve been swimming against it my whole career,” Marshall says. “But now, going forwards, the spotlight is on us. It’s on fire. What a time to be a female boxer.”

It’s a view echoed by Jonas, the first British female boxer to compete at an Olympics, who understands that, at 36, she may never see the crest of the wave she’s helped create. “We always knew how good women’s boxing was but now people are seeing us higher up the bills, even headlining,” she says. “No one questions why there are female fights on these big cards anymore. Fight Camp helped a lot and the support is massive. That has to be positive. We’ve come a long way but we can’t get ahead of ourselves. We’re a growing sport and there’s a long way to go. We’re still probably a century behind the men.”

The glaring disparity unsurprisingly circles around pay and Marshall is under no illusion that the recent increase in opportunities is largely owed to the fact that “women’s title fights are a lot cheaper to put on”. There are currently only 34 active professional female fighters from Britain, according to BoxRec, compared with 1,064 men. It is not that the pool of talent doesn’t exist, but that there are few incentives to subject oneself to a brutal and futile chase. “I never really had any interest in turning pro,” says Marshall. “On the GB squad, they’d drill into us that we’d make no money out of pro boxing. I knew I wasn’t going to be a superstar or seen in the same way as the men or paid in the same way.”

“The baseline when you turn professional is quite similar between men and women,” says Jonas. “But when you move up, the money doesn’t change. A women’s world title fight is probably paid around the same as a men’s English title fight.” And while the fighters are grateful for any recent progression at all, it hardly deserves saying that inequality should never be the grounds for success.

After two fights were cancelled this year, Marshall was left £3,000 out of pocket and applied for jobs at delivery services and supermarkets alongside her training. Hannah Rankin, Marshall’s eventual opponent for the WBO middleweight world title, has only been only able to sustain the costs of professional boxing by balancing it with a career as a classical musician.

“We bleed the same, work the same, sweat the same,” Rankin says. “We’re not taking it any easier because we’re chicks. The difference in pay when you get up towards the titles is massive. Most women have second jobs. We’re doing it for the love of the sport because we can’t make enough to do it for financial reasons.”

Chantelle Cameron, a close friend of Marshall’s on Team GB, also won her first world title in October but accepts that the financial uncertainty is unavoidable. “Of course, we shouldn’t have to worry about it but that’s just the way it is.” More importantly, she says, it’s the difference made now that can alter the fortunes of those who follow in her footsteps.

“When I started off, it was off-putting being the only girl. I had to fit in with the boys,” she says. “Even when I used to box on amateur shows, there’d be people who’d shout comments like women shouldn’t be boxing. Afterwards, they’d come up to me and shake my hand and say I’d changed their view. I’m proud of that, and the more we grow, the more opinions like that will die out. I couldn’t have imagined the improvements we’ve seen over the past year, but we can’t afford to be complacent. It’s not there yet. We should be paid equally and if we keep pushing, the younger generation will have a lot more opportunities and be able to get the most out of it.”

That is the overriding message and motivation for those at the sport’s pinnacle. They are fighting on three fronts: against the past, for the future, and in the here and now. This is only the beginning and there is no time to rest on an unprecedented step forwards. Then, one day, the next young female prodigy standing outside a shuttered gym might never need to feel out of place at all.

“My main goal now as a fighter is to push the boundaries as much as I can, when it comes to getting paid, what platforms we are on, and getting girls in the gym,” says Rankin. “When you’re at the forefront of it, that’s your job. You’re fighting for change. At whatever point I retire, I want to see that that women’s boxing has taken a great step forward.”

The best Android apps for business in 2021

‘Play it safe’: WHO pleads with Europe to have quiet Christmas or risk third wave across continent in early 2021